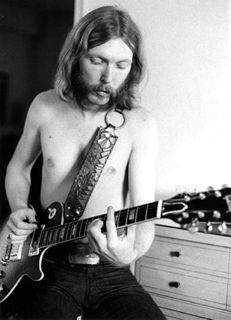 Howard Duane Allman (November 20, 1946 – October 29, 1971) was an American guitarist, session musician, and co-founder and leader of the Allman Brothers Band until his death in a motorcycle crash in 1971, when he was 24 years old.A sought-after session musician both before and during his tenure with the band, Duane Allman performed with such established stars as King Curtis, Aretha Franklin, Wilson Pickett, and Herbie Mann. He also contributed greatly to the 1970 album Layla and Other Assorted Love Songs, by Derek and the Dominos.

Goin' Down Slow on An Anthology by Duane Allman

Mean Old World on An Anthology by Duane Allman

No Money Down on An Anthology Vol. 2 by Duane Allman

Happily Married Man on An Anthology Vol. 2 by Duane Allman