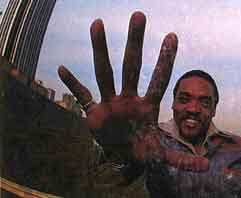 Dutch "Teddy" Robinson is a singer, songwriter, music producer and actor. He was one of the original lead singers with the Ohio Players. After leaving the Players, Dutch went on to produce such hits as "I Ain't Got Nothin" (later to be sampled by Bone Thugs-n-Harmony in 2002 for "Money Money"), and "Can't Get Along Without You". He was also a member of the short-lived Elbow Bones and the Racketeers and was the founder and leading singer/songwriter of "Life". Native of New York, USA, he moved to Nova Scotia, Canada in the late 1980s, then to Montreal in the early 00s. While in Montreal, he performed with Cirque de Soleil's "Drum". In 2010, he performed in the opening ceremonies of the Winter Olympic Games in Vancouver, Canada. He released his latest album, entitled "Freedom", on September 6

Can't Get Along Without You on We Came To Funk You Out: Disco From The United Artists Label by Various Artists

BY MYSELF (THE OT MIX) on BY MYSELF by Dutch Robinson

Happy on Happy by Dutch Robinson