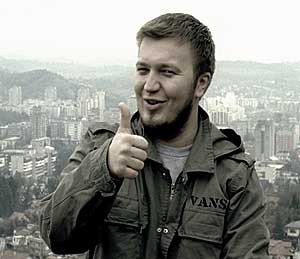 Rapper, originally from Brčko, Bosnia & Herzegovina, since 2001 based in Zagreb, Croatia. Teaming up with Zagreb's hip-hop producer Shot (member of a rap-group Elemental) led to issuing a couple of singles the same year. He released his debut "Slušaj Mater" in 2002, his second album "No Sikiriki" (2004.), third album "Stig'o Ćumur" (2006.) and fourth album "Balkansko a Naše" (2008). In 2010 he released a compilation album entitled "Spomen Ploča 2002-2009". His 5th studio album called "Štrajk Mozga" was released on april 21, 2012. Also a member of groups Defence and Disciplinska Komisija, which are based in Bosnia & Herzegovina.

Mahir I Alma on Slušaj Mater by Edo Maajka