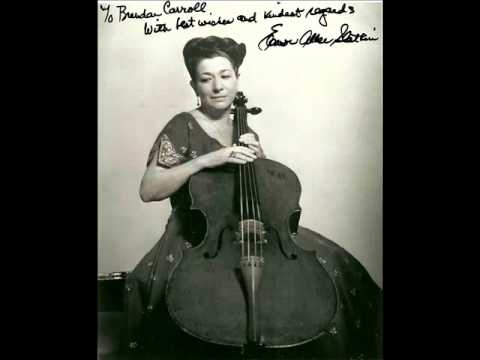 vc, US
Musician of Jazz
A.k.a. Eleanor Aller Slatkin

Eleanor Aller (Slatkin) (May 20, 1917 – October 12, 1995) was an America cellist and founding member, with her husband, Felix Slatkin, of the Hollywood String Quartet.[citation needed]Born in New York City, she was the daughter of cellist Gregory Aller (né Grisha Altschuler), a Jewish emigre from the Russian Empire. Eleanor Aller became principal cellist in the Warner Bros. Studio Orchestra in 1939, of which her brother, pianist Victor Aller, was orchestra manager and in which their father also played for a time. The same year she met and married Felix Slatkin. Shortly after their marriage, the couple founded the Hollywood String Quartet. Aller also continued working as a Hollywood studio musician. After Slatkin's death in 1963, in addition to her work with orchestras for movies, Aller pla