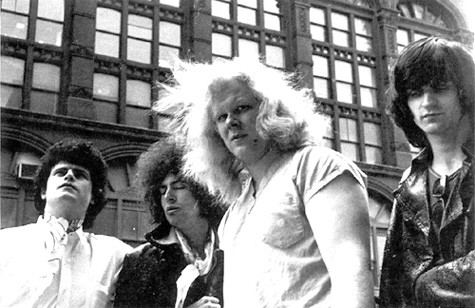 The Electric Eels (stylized as electric eels, in reference to e. e. Cummings) were an American protopunk band active between 1972 and 1975, formed by John Morton in Cleveland, Ohio.Electric Eels played only five public shows, but during their brief existence they earned a reputation locally for being angry, confrontational and violent. They were notorious for starting fights with audiences which drew police attention; members were also abusive to each other off-stage.[citation needed] Their style was a discordant, noisy amalgam of hard garage rock and free jazz. Stiv Bators, the singer of The Dead Boys was particularly influenced by the vocal styling and stage presence of Dave "E" McManus. While the eels didn't play many shows, they rehearsed often, eventually making many recordings which

Agitated on Soul Jazz Records Presents PUNK 45: Kill The Hippies! Kill Yourself! The American Nation Destroys Its Young - Underground Punk in the United States of America, Vol. 1 1973-1980 by Various Artists

Splittery Splat on Soul Jazz Records Presents Punk 45: Extermination Nights in the Sixth City - Cleveland, Ohio: Punk and the Decline of the Mid-West 1975-82 by Various Artists