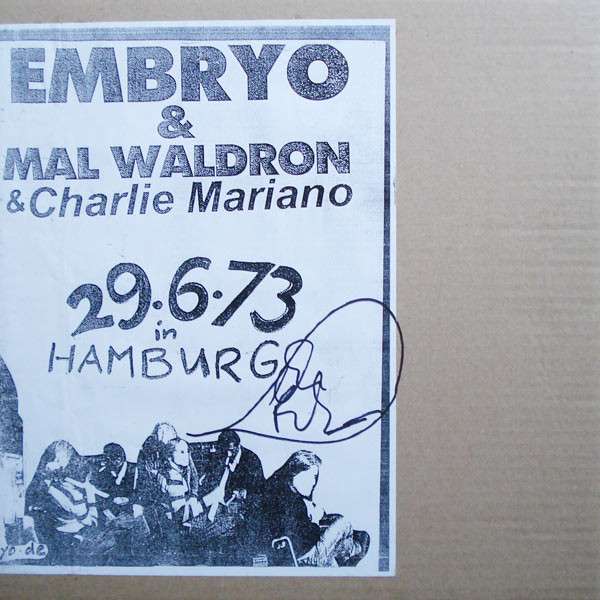 No information on the cover, but according to Christian Burchard... A1. Riding 9:06 A2. Flute & Saz 12:47 B1. The Call 14:59 B2. A Place To Go (edit) 3:18 Original 2003 release (never issued before) issued by the gig promoter to mark the 30 years since Embryo played at the same venue. Some copies come with inserts: "... This LP features a live recording from a concert in Hamburg on June, 29th 1973 with special guest appearance by Mal Waldron (who died December 2nd, 2002) and Charlie Mariano. Many thanks go out to Max Weisseneldt (aka Muggy Whitefield, drummer of the Poets Of Rhythm !!!) who is responsible that this recording was released the first time on vinyl 30 years later .../... Max pressed only 250 copies of this LP because he thought it would be difficult to sell them. I agreed because this band is probably known only by people who are into german funk-jazz-rock and people outside Germany may not know Embryo well if at all .../..." (Christian Burchard) Embryo: Christian Burchard, Roman Bunka, Klaus Götzner, Mulah Stiletti, Mal Waldron, Charlie Mariano. NDR Broadcast of the Concert lists these Tracks 1. That's What We Trying To Do 9:04 2. Vibra Jam 12:45 3. Entrances 14:58 4. Session (fades out) 3:20 and this Lineup of the Band Christian Burchard - drums, vibraphone Ralph Fischer - bass Edgar Hofmann - sax, trumpet, violin Siegfried Schwab - guitar + Mal Waldron - keys Charlie Mariano - sax White label LP in a corrugated card mailing box.