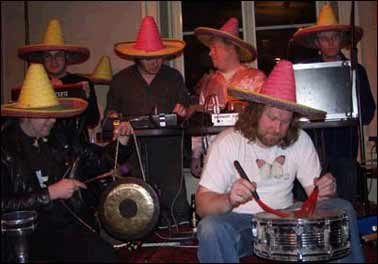 En Halvkokt I Folie is the pioneer band in the Swedish electronic/experimental scene. Enstablished in 1982 by Lars Larsson, this crazy project released a lot of cassette tapes on their own label Konduktör Rekords, and it was just at the beginning of the 90s' that they released their first CD, thanks to the interest of Cold Meat Industry. Their music is absolutely unpredictable, shifting from loops experiments with noise and voices to demented and hilarious synth pop parody songs. En Halvkokt I Folie are still active and play a lot of gigs in Sweden and Scandinavia.