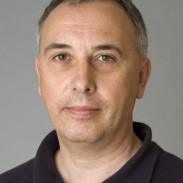 Producer - Engineer Eric Calvi is a French sound engineer and record producer, whose work has included engineering on Duran Duran's "Meet El Presidente" single in 1987. Born in the heart of Paris in 1959, Eric grew up in the suburb of Paris and fell in love with music at an early age. His father was born in Italy and moved to France. During Calvi's teens he formed all sorts of bands, playing the guitar and took inspiration from people like Frank Zappa, Robert Fripp, George Benson and John McLaughlin. Being French, he was very much into jazz-rock and classical music. Calvi bought his first pop record at the age of twelve, the British band Osibisa and eventually got into rock bands such as Pink Floyd. Calvi decided he wanted to be a jazz guitarist and began to study music. In 1980, he left France and went to New York with a friend. To finance the trip, Calvi told his parents he wanted to be a sound engineer. Six months after arriving, he secured a job at a studio called Sound Ideas In 1984, he joined The Record Plant in New York as an assistant engineer when Cyndi Lauper was recording her first album She's So Unusual, featuring "Time After Time". More work followed including sound engineering on tracks by George Benson, Wet Wet Wet and Aztec Camera.