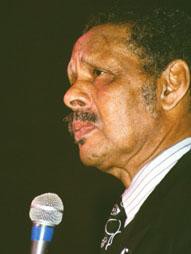 Jazz, blues & pop singer was born on December 25, 1927 in Philadelphia, Pennsylvania. He is still performing as of 2018. Ernie Andrews has managed to be both popular and underrated throughout his lengthy career. After his family moved to Los Angeles, he sang in a church choir, and while still attending high school had a few hits for the G&G label. Billy Eckstine and Al Hibbler were early influences and, after reaching maturity, Andrews was somewhat in the shadow of Joe Williams (who has a similar style). Andrews recorded for Aladdin, Columbia, and London in the late '40s, spent six years singing with the Harry James Orchestra, and cut a couple of big band dates for GNP/Crescendo during 1958-1959. Despite his unchanging style, Andrews was mostly in obscurity during the 1960s and '70s, just making a couple of albums for Dot during 1965-1966. A 1980 Discovery date found him in excellent form, and in the '80s, he was rediscovered. Andrews recorded with the Capp/Pierce Juggernaut, Gene Harris' Superband, Jay McShann, and with the Harper Brothers, in addition to making a few sets in the 1990s for Muse, and later High Note. He is also prominent in the documentary: Blues for Central Avenue.

I'm Always Drunk In San Francisco (And I Don't Drink At All) on Live Session! by Cannonball Adderley & Ernie Andrews

Since I Fell For You on Live Session! by Cannonball Adderley & Ernie Andrews

Next Time I See You on Live Session! by Cannonball Adderley & Ernie Andrews