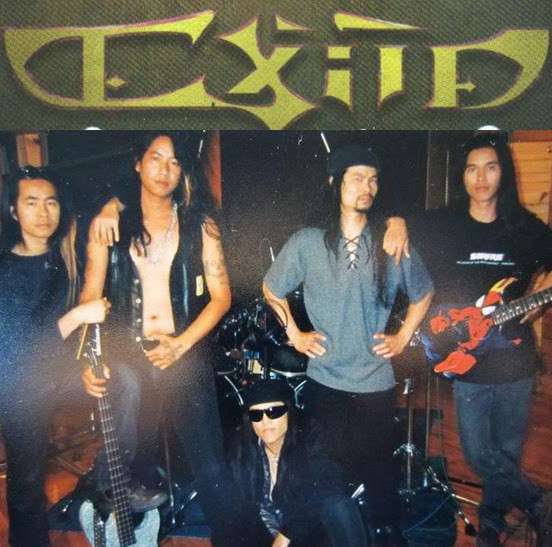 Heavy metal band formed in 1991 in Canada by some Lao musicians who moved to Ontario since 1975 Original line-up was: Peth Noravong เพรช - Vocals, Guitars, Keyboards Khamsing Phommachak - Guitars Ole Sysomboun โอเล่ (เล่) - Bass Vieng Phavongkham เวียง - Drums many other members played during the years: Sith Manikhong- guitar Kique Mekmorakoth- guitar, piano Kak Manikhong- bass Santi Klangsaton- piano, keyboard The first album "ບ້ານເກີດເຮົ າ - Our Homeland" was recorded in 1991 in Canada and released on tape only The second album "The Exile - ดิเอ็กซาย" was recorded in 1995 in thailand and produced by Grammy Thailand/MGA Records. It was released on CD and Tape and it was completely sung in thai language. The band therefore had a successful tour and tv appearances in Thailand The third album "ບ້ານເກີດເຮົ າ II - Homecoming" was recorded in Germany in 1999 but it is not clear if it was ever released or is still unreleased. Many other songs were recorded in the 90's as single video tracks only The band is stil active Informations about first and third album are very scarce and only a handful of videoclip are available. Also known as: "The Exile" (on the first tape) "ดิเอ็กซาย" (on the second album - phonetic transcription in thai) "ເດິເອ້ກຊາຍ" (on the thrid album - phonetic transcription in lao)

Dancing In The Rain on Below the Heavens by Blu & Exile

O Heaven on Give Me My Flowers While I Can Still Smell Them by Blu & Exile, Blu & Exile

When It Rains (feat. Aloe Blacc) on E&J by Dag Savage, Exile & Johaz

Soul Rising on Below the Heavens by Blu & Exile

First Things First on Below the Heavens by Blu & Exile

A Letter on Give Me My Flowers While I Can Still Smell Them by Blu & Exile, Blu & Exile

Maybe One Day on Give Me My Flowers While I Can Still Smell Them by Blu & Exile, Blu & Exile

Greater Love on Below the Heavens by Blu & Exile