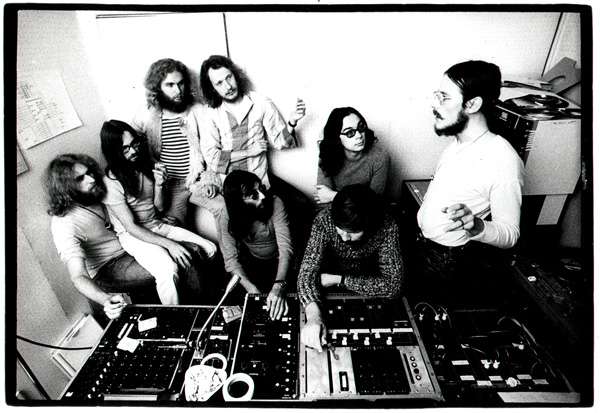 Since 2004 two different bands, both having original members, carrying the name Faust are active. Please do only submit pre-2004 Faust recordings in this profile. Recordings from 2005 and later should be submitted under Faust (6) when it concerns the Faust with Joachim Irmler, or under Faust (7) when it concerns the Faust with Jean-Hervé Peron and Werner 'Zappi' Diermaier. German for "fist", and also the protagonist of Goethe's eponymous play, Faust were one of the first bands to use the recording studio as an instrument. After two albums for Polydor, they signed with the fledgling Virgin label. Priced as a single, "The Faust Tapes" album sold a staggering 50,000 + copies - amazing since it is one amazingly weird pastiche. Their live appearances were explosive (literally), as the pinball machines and jack-hammer legends detail. The band carried on for nearly two years after "IV", however that album, recorded outside the Wümme studio, was their last. Faust came back in 1995 with a new series of albums and live appearances.

The Sad Skinhead - 2006 Digital Remaster on Faust IV by Faust

Just A Second (Starts Like That!)/Picnic On A Frozen River/Deuxieme Tableaux - 2006 - Remaster on Faust IV by Faust

Jennifer on Faust IV by Faust

Flashback Caruso on The Faust Tapes by Faust

Vorsatz on Vorsatz by Faust