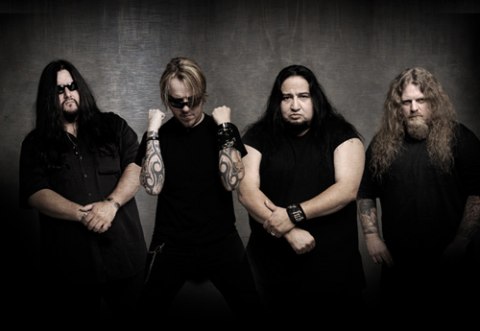 Fear Factory were formed in 1989 in Los Angeles by Dino Cazares (guitar), Raymond Herrera (drums), Burton C. Bell (vocals) and later Christian Olde Wolbers (bass) under the name Ulceration before switching in 1990 to their current moniker. Influenced by British Grindcore and extreme music such as Napalm Death and Godflesh, Fear Factory's career has seen them pioneer a hybrid of Death Metal, Industrial Metal, Alternative Metal and electronic music. Their first album "Concrete" from 1991 was not released until 2002. This was also the first production job for then unknown Ross Robinson who would later produce bands such as Korn, Machine Head, and Slipknot. Strong personal differences led to a break-up in 2002 but the band re-formed a year later minus Cazares with bassist Christian Olde Wolbers taking on guitar duties while Strapping Young Lad's Byron Stroud entered to take over live bass. Another hiatus followed in 2006. In 2009 Fear Factory returned with founding member Cazares in the band again, but without Herrera and Wolbers.

Linchpin on Digimortal by Fear Factory

Hatred Will Prevail - Monolith Remix on Recoded by Fear Factory

Replica on Demanufacture by Fear Factory

Regenerate on Genexus by Fear Factory

Edgecrusher on Obsolete by Fear Factory

Powershifter on Mechanize by Fear Factory

Descent on Obsolete by Fear Factory