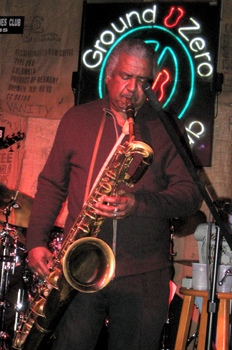 Floyd Newman is a saxophonist, session musician and bandleader. As a baritone sax player, he was long associated with Stax Records, and as a member of The Mar-Keys’ horn section and the Memphis Horns.Born in Memphis, in the late 1940s he became a member of the B.B. King Review, with, among others, George Coleman and George Joyner. Newman later moved to Detroit and recorded with Jackie Brenston, and toured with Sam Cooke before returning to Memphis. Newman also led a band featuring Howard Grimes on drums, Joe Woods on guitar and Isaac Hayes on keyboards, and which performed at the Plantation Inn. This line-up also recorded a 45, “Frog Stomp”, co-written by Newman and Hayes. Newman and Hayes had previously coincided in Ben Branch’s house band at the Tropicana Club, with Hayes as a vocalist.

Sassy on Stax Singles, Vol. 4: Rarities & The Best Of The Rest by Various Artists

Frog Stomp on Stax-Volt: The Complete Singles 1959-1968 by Various Artists