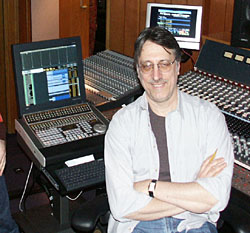 Frank Filipetti is a 6x Grammy-winning music producer, engineer and mixer who was born in Bristol, Connecticut. Frank won 4 of those Grammys for The Book of Mormon, Wicked, Monty Python's Spamalot and Elton John and Tim Rice's Aida. He was one of the first engineers to embrace digital. His credits include mixes for such number one singles as Foreigner's "I Want to Know What Love Is" and "I Don't Want to Live Without You" (which he also produced), the 1983 KISS album, Lick It Up and The Bangles' song, "Eternal Flame." Filipetti engineered and produced Survivor's 1988 album, Too Hot to Sleep. Filipetti also recorded and mixed albums for Carly Simon, Barbra Streisand, Vanessa Williams, George Michael, 10,000 Maniacs, Lauren Kinhan, and James Taylor, whose Hourglass Filipetti produced, enginee