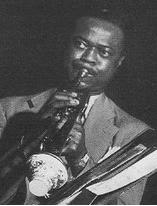 American jazz trumpeter. Born 4 January 1906 in Emory, Virginia. Died 11 March 1954 in New York City, New York. He played in several local bands in New York during the 1920s and 1930s including those of Elmer Snowden (1927 and 1930), Bessie Smith (1933), Sam Wooding (1934), Chick Webb, Charlie Barnet, Andy Kirk and "Fess" Johnson. In the 1940s was a member of the orchestras of Lucky Millinder and Pete Brown, also played in the jazz clubs of New York City and Boston with many musicians including pianist James P. Johnson, drummer Sid Catlett and clarinetist Edmond Hall. Conducted (and recorded) with his own groups as "Frankie Newton & his Uptown Serenaders" (1937), "Frankie Newton and his Orchestra" (1939 and 1941), "Frank Newton Quintet" (1939), "Frank Newton and his Café Society Orchestra" (1939), "Frankie Newton & the Crimson Stompers" (1951).