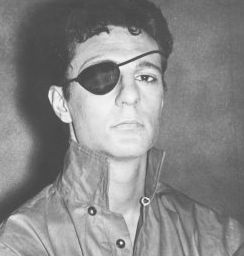 Born in Willesden, London on 23rd December 1935. By the 1950's Heath had become immersed in the skiffle craze and having progressed from banjo to guitar, formed his own group, The Five Nutters. Brian Donalon (washboard), John Gordon (12) (bass) and Clive Lazell (snare drum) were among those featured in the line up which played at many local venues and talent contests, but the unit quickly outgrew the genre's limitations and a local agent Don Toye, suggested that Heath should front a rock 'n' roll band. 'The Freddie Heath Combo' was a short lived affair & in 1958 the singer & his bassist, Johnny Gordon, joined another group at that time led by Mike West (11). This particular act enjoyed a resident spot at Wandsworth Town Hall, but when it became clear that Heath was a superior vocalist, the newcomer became its undisputed focal point. Alan Caddy (lead guitar), Tony Docherty rhythm guitar), Ken McKay (3) (drums) & Tom Brown (26) (backing vocals) completed the line up which was spotted by a local rep. from EMI. A contract with HMV ensued & the group - now dubbed Johnny Kidd & the Pirates - entered Abbey Road Studio in April 1959 to record its first single.