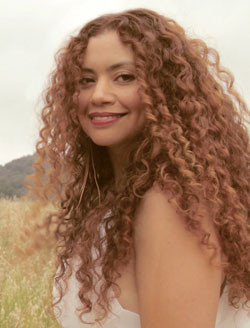 Band,
Singer of Jazz and Electronic

Born, raised and based in Los Angeles, California, singer, songwriter, musician Gaby Hernandez has been collaborating with some of her cities brightest and released solo music material. Hernandez was a founding member of the creative soul music ensemble Build An Ark and has been recording and performing with them since 2001. Influenced by everything from opera to pop, folkloric to experimental, Hernandez can be categorized somewhere between two of her biggest influences, Sade and Karen Carpenter. Her sound is all her own though, she fuses many influences into one unique style.

I Will Keep You on Spirit Reflection by Gaby Hernandez

Stay a While on Spirit Reflection by Gaby Hernandez

Mangoes and Pears on Sweet Starry Night by Gaby Hernandez

Into Oya! on Spirit Reflection by Gaby Hernandez