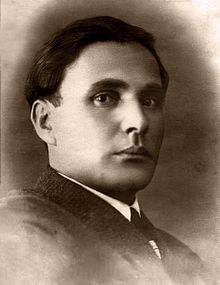 Galaktion Tabidze (Georgian: გალაკტიონ ტაბიძე), simply referred to as Galaktioni (Georgian: გალაკტიონი) (November 17, 1892 – March 17, 1959) was a leading Georgian poet of the twentieth century whose writings profoundly influenced all subsequent generations of Georgian poets. He survived Joseph Stalin's Great Purge of the 1930s, which claimed lives of many of his fellow writers, friends and relatives, but came under heavy pressure from the Soviet authorities. Those years plunged him into depression and alcoholism. He was placed in a psychiatric hospital in Tbilisi, where he committed suicide.