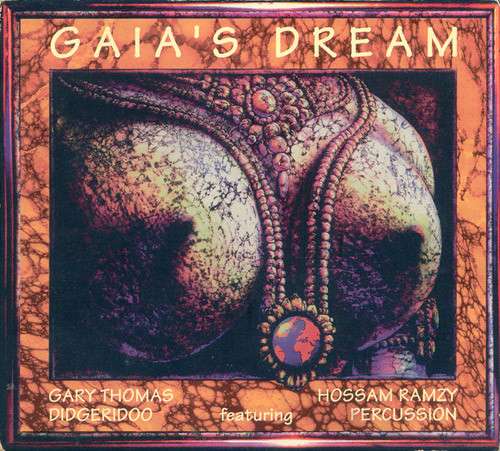 Total enjoyment time 49:39 To be Respected for the Jewel - She Truly is - This is Gaia' Dream Gary Thomas the Didge-Man is a sixth generation Australian, who was taught by Aborigines to play the Didgeridoo. Over 100 000 years old, the didge is the most ancient Instrument on earth. Sent by the elders of aboriginal tribes, he went to the west as an ambassador to bring their culture and the didge to the people. His workshops all over Europe attract all kinds of people. He teaches not only the techniques of circular breathing, but also yoga exercises and stories about the dreamtime. Because of his alround talente, he is able to play varied styles, and because of his personality in live performances he always fascinates huge audiences. Hossam Ramzy - The Sultan Of Swing - is the master of the Egyptian tar and darbuka, whose skills have been used by Peter Gabriel, Robert Plant and Jimmy Page on their albums. Gary performed with Hossam in England and Belgium with overhelming success. So Gary invited Hossam to play on this album. In a Studion nearby Munich, Germany they created tracks in which their ancient Australian and Egyptian Instruments came together in the spirit of harmony and peace to bring rhythm and stories to listeners all over this planet. This Is Gaia's Dream Recorded at TT-Studio, Hohenbrunn, Munich by Franz Schmuck