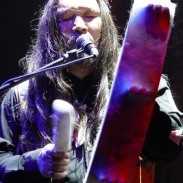 Born 1965 in Shuj, Tuva. Musician, master and teacher of throat singing, instrumentalist, shaman, stone and wooden sculptor. Gennady Chamzyryn is a master of KARGYRAA overtone singing. Kargyraa is the lowest among the base styles of throat singing. It is closely connected with the shaman identity of Gendos. He belongs to the roots, the lowest part of the shaman tree which classifies him as the shaman of the Underground Sphere. Gennady Chamzyryn is an uncommon person of the Tuvian music scene. His art is based on tradition. His Grandmother was a shaman and Gendos is following her way. He developed his talent, while searching for new solutions. Gennady worked with Biosintes which recorded “First Take” with Sainkho Namtchylak in 1994. Sainkho and Gendos are the avant-garde among Siberian musicians. Currently Gendos forms an experimental band called K-SPACE with Ken Hyder and Tim Hodgkinson from Great Britain. Their music called SHAM BEAT incorporates the elements of shamanic culture as well as jazz. Gendos founded the rock band with Alexander Sayaa (ex. Yat-Kha) in 2000. Musicians adopted his name and created a special ideology: Gen–DOS (genetic–computers /tradition–progress). In 2004 Gennady formed a band called UGAAN (earlier Gendos West Trip) with a young Polish musician Darek Makaruk. They found a middle way between Tuvian tradition and contemporary electronic music. Lately Gendos has started solo carrier. He plays a lot of concerts with shamanic and traditional Tuvian music. He takes part in few jazz projects. He plays in trio Gendos Mazzoll (bass clarinet, clarinet) Janicki (bass) and with open jazz band with Piotr Rachoń (piano) Aleksander Papierz (sax) and guests (as for example Sainkho Namtchylak at Colour of Ostrava Festival). Gendos Chamzyryn died from a heart attack on 18 June, 2015.