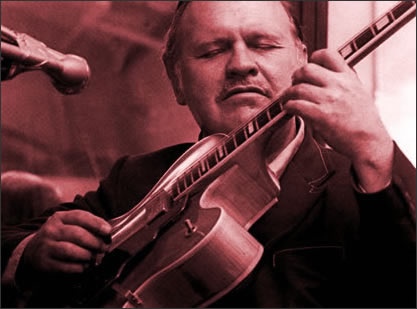 American swing jazz guitarist, born July 17, 1921 - South Chicago Heights, Illinois, USA - died September 5, 1977 - Concord, California, USA. He started his professional career at the age of 12, when he received his musicians' union card, and toured throughout the Midwest. By the time he was 14, he was accompanying blues vocalists such as Big Bill Broonzy and Blind John Davis. On March 1, 1938, he recorded "Sweetheart Land" and "It's a Lowdown Dirty Shame" with Broonzy, the first commercial recordings of an electric guitar. Later in 1938, he was hired as a staff musician for the NBC orchestra, and became a featured performer on the radio shows National Barn Dance and Plantation Party. In 1940, Barnes released his first recording under his own name on Okeh Records, "I'm Forever Blowing Bubbles" backed with "I Can't Believe That You're In Love With Me". Barnes was drafted into the Army in 1942. Immediately after his discharge in 1946, Barnes formed The George Barnes Octet. He and his wife, Evelyn Lorraine Triplett, married in Chicago on January 17, 1947. In 1951, Barnes was signed to Decca Records by Milt Gabler and moved from Chicago to New York City. In 1953, he joined the orchestra for the television show, Your Hit Parade. The band was conducted by Raymond Scott and Barnes was a featured soloist. Barnes, Scott, and vocalist Dorothy Collins (Scott's wife) also recorded together. In addition to being a well-known jazz musician, Barnes also made a living as a New York studio musician, and played on hundreds of albums and jingles from the early 1950s through the late 1960s. Barnes was primarily a swing jazz guitarist, but could play in any style, as evidenced by his work on The Jodimars [2] Barnes participated in hundreds of pop, rock and R&B recording sessions: he was a regular guitar player on most of The Coasters' hit records produced by Jerry Leiber and Mike Stoller, he provided the guitar solo for the Connie Francis hit "Lipstick on Your Collar (song)," and he can be heard on The Drifters' version of "This Magic Moment" and Jackie Wilson's "Lonely Teardrops". Barnes recorded three albums for Mercury Records. The latter two recordings contained Barnes' unique orchestrations with 10 guitars, also known as his "guitar choir," which utilized the guitars as a horn section. They were two in a series of Mercury albums that used an early 1960's state-of-the-art recording technique known as "Perfect Presence Sound." His albums with his guitar duo partner Carl Kress received national acclaim in the early 1960s. After the 1965 death of Kress, Barnes formed another guitar duo with Bucky Pizzarelli. Their partnership lasted from 1969-1972, and they recorded two albums. In 1973, Barnes created a partnership with cornetist Ruby Braff. From 1973 until 1977, Barnes recorded several well-received albums for Concord Jazz under his own name, as well as with the quartet he had formed with Braff. Barnes and his wife, Evelyn, had left New York City after his last European tour in 1975 to live and work in the San Francisco Bay Area. Barnes died of a heart attack in Concord, California in 1977, at the age of 56. Barnes' style took shape before the development of bebop, and he remained a swing stylist throughout his career. His lines were usually short, very melodic, bluesy and "inside" (i.e. diatonic) as compared to the chromaticism and long lines of bop era guitarists. His improvisations often employed call and response phrases, and his tone was clearer, cleaner and brighter than many other jazz guitarists (such as Joe Pass or Jim Hall) and reflected his "happy" approach to music. Not long before his death, he recorded three live albums -- two produced from a concert at San Francisco club Bimbo's 365, the other at The Willows Theatre in Concord, California. The albums are good examples of his swinging, happy and often mischievous style. The albums also include his banter with the audience, and his introductions of tunes and his band, giving the listener a glimpse into his sense of humor. In 1942, Barnes wrote the first electric guitar method, The George Barnes Electric Guitar Method, published by Wm. J. Smith. In 1961, he wrote and recorded for Music Minus One, George Barnes' Living Guitar Method; The Easy Way to Learn All the Chords and Rhythms and Ten Duets for Two Guitars (recorded with his partner Carl Kress). In 1965, he wrote How to Arrange for Solo Guitar, published by Peermusic. He also produced the first guitar course offered on cassette tape, The Great George Barnes Guitar Course, published in 1970 by Prentice Hall.

In the Gloaming on Country Jazz by George Barnes