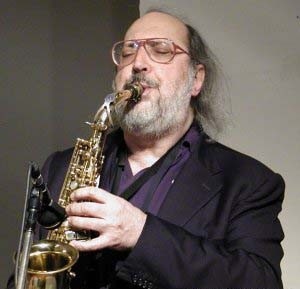 Gianluigi Trovesi (born in 1944) is an Italian jazz saxophonist, clarinetist and composer. A native of Nembro, a small town near Bergamo, Lombardy, he studied harmony and counterpoint under Vittorio Fellegara. Since then he has been a major player in the Italian and European (free) jazz scene. He also teaches clarinet and saxophone in Italy. He has won various Italian jazz awards. In 1978 Trovesi won the first prize in the Italian jazz competition for saxophone and clarinet, landing a permanent job in the Milan Radio Big band (until 1993). After a concert in Bergamo with Giorgio Gaslini's Sextet, the influential European producer Joachim-Ernst Berendt called him for his Clarinet Summit production, an all-star group with clarinet soloists, John Carter, Perry Robinson, Theo Jörgensmann and Ernst Ludwig Petrowsky. In the 1990s he formed his renowned octet, with Pino Minafra on trumpet. The first record of the group (From G To G, 1992) won the Italian Top Jazz poll and five stars in Down Beat. The octet's Les Hommes Armès (1996) was voted Best Record of the Year and the Trovesi Octet best Italian Jazz Group in the Musica Jazz Italian Top Jazz Poll (1993, 1996; Trovesi already won in 1988 as best musician). Those records are characterized by the meeting of the learned classical and contemporary music, from Renaissance music to serialism, and the Italian folk, in a context of jazz improvisation. During the years the Octet went through important changes in the lineup. In 1999 Trovesi composed "Round About A Midsummer's Dream", a suite whose inspiration comes from Shakespeare's mention, of the "Bergamasque" dance. The music is performed by a nonet based on three Trios: a jazz trio with sax, bass and drums, a classical string trio, and a folk trio with accordion and tamburello. He has toured, recorded and performed with renowned improvisers, jazz musicians and musical experimenters, including Anthony Braxton, Misha Mengelberg, Horace Tapscott, Steve Lacy, Evan Parker, Kenny Wheeler, Manfred Schoof, Mark Dresser, Han Bennink, Barre Phillips, Tony Oxley, and Günter Sommer. Trovesi is also member of the Italian Instabile Orchestra and a duo with accordeonist Gianni Coscia.