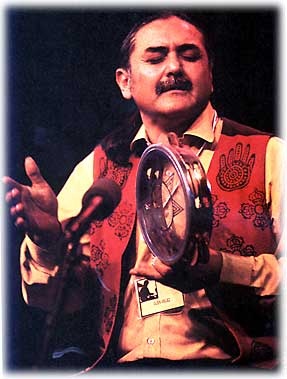 American percussionist, vocalist, composer and teacher, born 1949, specializing in frame drums from around the world. He has created his own musical style inspired by both Western percussion and frame drum performance styles from around the world. His concerts include an array of instruments such as the Egyptian riq (a small, intricately inlaid tambourine), the Irish bodhran (a large single-headed drum), and the North African tar (an instrument of desert nomads).

Untold: Stage I: The Quest on Rumi Symphony Project: Untold by Hafez Nazeri

Awakening on Nafas by Rabih Abou-Khalil

Window on Nafas by Rabih Abou-Khalil