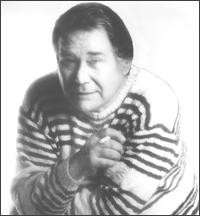 Arranger, conductor, orchestra leader and songwriter. Often wrote songs together with his wife Edna Osser. Born: 28 August 1914 in Munising, Michigan, USA. Died: 29 April 2014 in Mamaroneck, New York, USA (aged 99). The child of Russian-Jewish immigrants, in high school he played piano, violin, saxophone and clarinet and went afterwards to study music at the University of Michigan, beginning in music education and switching to music theory, graduating in 1935. He moved to New York and got involved in the local Jazz Scene, soon getting to record with Les Brown and Benny Goodman. He also got hired by radio broadcasting station NBC, to work as a staff arranger. During WWII, he started to arrange with Paul Whiteman and being still in broadcasting industry with ABC Network and NBC Blue Network. Later in his career, he backed famous musicians like Patti Page and Doris Day. He can be found a huge amount of records, always having a role in leading the orchestras. He also worked under a number of other names like Arthur Meisel, Bob Marvel, Maurice Pierre, and others.