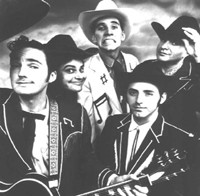 Goober & The Peas were a cowpunk band from Detroit, Michigan, known for blending odd humor to a darker side of country music, and for Jack White of The White Stripes having served as their drummer.The band was known for their frenetic live shows in the early and mid-1990s. The Austin Chronicle called them "some seriously sick individuals, and quite possibly the most exciting live act in America" after their performance at South by Southwest in 1993. They performed with Nick Cave and the Bad Seeds, Bob Dylan, Red Hot Chili Peppers, Morphine and Uncle Tupelo. Their debut EP, The Complete Works of Goober & The Peas, was followed by an LP of the same name in 1992 and a follow-up LP, The Jet-Age Genius of Goober & the Peas, 3 years later. They also released a Christmas record and appeared on co