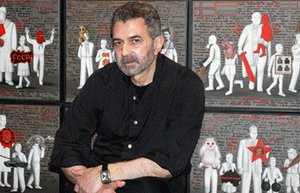 Grisha Bruskin was born in Moscow on October 21, 1945. Between 1963 and 1968, Bruskin studied at the Moscow Textile Institute (Art Department). In 1969, he became a member of the Artists’ Union of the USSR. Bruskin’s participation in the famous Sotheby’s auction in Moscow (1988) brought him worldwide fame, when his piece, “Fundamental Lexicon” was sold for a record price. In 1999, at the invitation of the German government and as a representative of Russia, Bruskin created a monumental triptych, “Life Above All” for the reconstructed Reichstag in Berlin. In 2001 he published a memoir-style book, “Past Imperfect.” In 2012 he received the Kandinsky Prize in the “Project of the Year” category, for his project, “H-Hour.” Bruskin lives and works in New York and Moscow. He is one of the best-kno