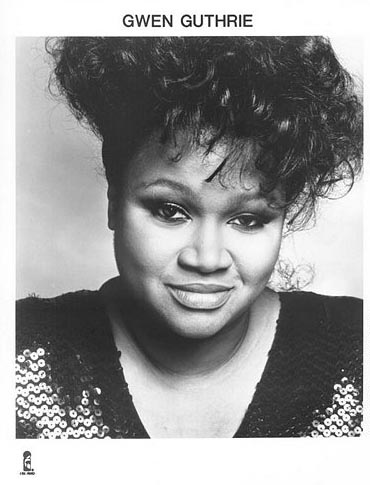 b. July 9, 1950 – d. February 3, 1999 Born in Newark, New Jersey. Guthrie studied classical music and piano at school. This grounding would stand her in good stead when she later developed her skills as a composer. She was already a rather good singer and, in the early 70s, joined the Ebonettes and the Matchmakers alongside Larry Blackmon, later the frontman with Cameo. Having graduated, Guthrie opted for a career in teaching but kept her hand in by doing jingle sessions for radio commercials singing the praises of Chevrolet, Avon or Kentucky Fried Chicken. In 1974, she began recording and touring as a backing vocalist with Aretha Franklin. In the studio, she struck up a friendship with a fellow session musician, Patrick Grant, and the pair wrote seven songs for the debut album of the girl-group Sister Sledge. They also penned the catchy "This Time I'll Be Sweeter", recorded by the Motown legend Martha Reeves and later by the UK soul vocalist Linda Lewis, and the infectious funk hit "Supernatural Thing" which made the US Top Five in 1975 for Ben E. King. The following year, Guthrie joined Roberta Flack on a major US tour. "She just had a wonderful voice", said Flack. "The sound was very special. What made it different was the resonance. She couldn't hide her voice. It was that kind of voice that penetrated." Before stepping out of the shadows, Guthrie wrote "God Don't Like Ugly" (issued in 1978 on the Roberta Flack album) and later sang background on Flack's Blue Lights in the Basement album (1977) and several duets that Flack recorded with Donny Hathaway. By 1979, Guthrie had relocated to Jamaica, where she renewed an acquaintance with Sly Dunbar and Robbie Shakespeare, the legendary rhythm section behind half the island's releases. Robbie Shakespeare recalls: "We first met Gwen in New York in 1978 when she was one of the backing singers on Peter Tosh's Bush Doctor album We asked all the singers to sing individually and, when Gwen's turn came, we were blown away: we thought she sounded like a bird. When she came to live in Jamaica, we nicknamed her "Natty" Gwen. We went on to work with her on a project called Bits And Pieces for Island Records". The former Wailer Peter Tosh, then on the Rolling Stones label, subsequently recorded the Mystic Man and Wanted: Dead Or Alive albums with Guthrie, who also duetted with him on 1981's "Nothing But Love". Sly Dunbar points out that "Gwen started Sly and Robbie's rhythm 'n' blues career and also kicked off Island's R&B department with her song `It Should've Been You' in 1982." With Sly and Robbie as producers, the singer cut the rest of her debut album, simply entitled Gwen Guthrie, and the 1983 follow- up, Padlock (the title track, "Seventh Heaven" and "Hopscotch" were all hits on the R&B charts). Just For You, produced by Eumir Deodato and released in 1985 was less successful; Guthrie quit Island for Polydor Records and hooked up with Sly and Robbie again for "Ain't Nothin' Goin' On But the Rent". "We laid down the rhythm," remembers Robbie. "In the studio, you only had to give Gwen the rhythm. She would sit and draw flowers while she worked on lyrics. She was wicked fun and had a great personality." Years before the Spice Girls, Guthrie's "Ain't Nothin' Goin' On But the Rent" struck a blow for girl power and the singer's feisty attitude paid dividends in Britain. The hooky, irresistible single climbed up the charts, eventually reaching No 5 in the summer of 1986. Guthrie was the toast of the UK soul scene, selling out the Hammersmith Odeon in London and the Fairfield Hall in Croydon (with Curiosity Killed the Cat as support) and scoring two further Top 40 hits with a cover of the Carpenters' song "(They Long To Be) Close To You" and the title track from her 1986 album Good To Go Lover. However, in the American market, "Ain't Nothin' Goin' On But the Rent" didn't quite achieve the crossover success it deserved and Guthrie moved from Polydor to Warner Brothers. Despite a crafty cover of the Marvelettes' "Too Many Fish in the Sea", her 1988 album Lifeline sold poorly and, even though Hot Times, the follow-up, included a duet with George Benson on "I'll Give My Best to You", Guthrie's time seemed to have passed. According to Benson, Guthrie "made you feel good about yourself. She had a very down-to-earth, down-home type of voice, but she was very articulate." A versatile vocalist with precise pitch, Guthrie came, however, to rely increasingly on her songwriting income, and session work. Over the years, she sang with a host of soul stars such as Angela Bofill, Billy Griffin, Thelma Jones and Luther Vandross, as well as with Steely Dan and Kenny Loggins. She was also one of the few American artists to understand the dynamics of reggae and recorded a couple of smooth lovers' rock tracks with Boris Gardiner. In 1996, another visit to Jamaica inspired the joyous single "Girlfriend's Boyfriend", before health problems began taking their toll. Gwen Guthrie died in Orange, New Jersey in February 3, 1999.