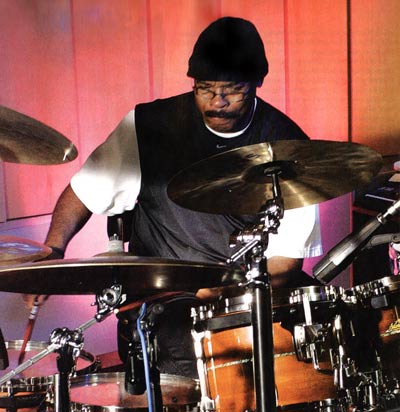 Harvey William Mason (born February 22, 1947, in Atlantic City, New Jersey) is an American jazz drummer. He has worked with many jazz and fusion artists, including Bob James, Chick Corea, The Brecker Brothers, Lee Ritenour, Herbie Hancock's Headhunters and almost all the Mizell Brothers productions with Donald Byrd, Johnny Hammond, Bobbi Humphrey and Gary Bartz. He is featured on George Benson's 1976 album Breezin'. His drum solo - a duet with percussionist Ralph MacDonald - on Benson's hit "On Broadway" is a great example of his unique style. Harvey is also the percussionist for the contemporary jazz group Fourplay, which includes keyboardist Bob James, guitarist Chuck Loeb, and bassist Nathan East.

On and On on M.V.P. by Harvey Mason

Modaji on Marching In The Street by Harvey Mason

What's Going On? on Funk In A Mason Jar by Harvey Mason

Spell on M.V.P. by Harvey Mason

How Does It Feel on M.V.P. by Harvey Mason

We Can Start Tonight on M.V.P. by Harvey Mason