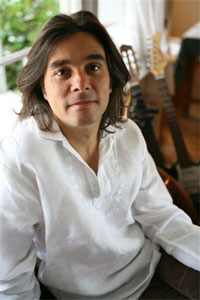 Brazilian born guitarist from Rio de Janeiro currently residing in Santa Monica, CA. Having played with some of the leading artists in Brazil he joined Simply Red (1984 -1995) as the band’s lead guitarist. He has also released three solo albums of his own music as well as featuring with widely diverse artists such as Sergio Mendes, Jack Johnson, Bryan Adams, Elton John, Seal, Willie Nelson and Nelly Furtado. In addition he has become involved in performing and composing film scores after attracting the attention of Hans Zimmer. He played guitar on and/or contributed music to the scores of Mission Impossible, Black Hawk Down, The Pledge and As Good As It Gets to name a few. Sometimes credited as Heitor and Heitor TP.

PX-41 Labs on Despicable Me 2 by Various Artists

Jillian on Despicable Me 2 by Various Artists

Take Her Home on Despicable Me 2 by Various Artists

Tower of London on Minions by Various Artists