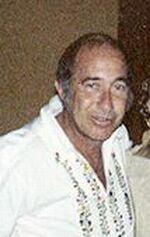 American producer and recording engineer, born May 31, 1926 in Magdeburg, Germany and died April 8, 2006 in Prescott, Arizona. He has worked with Joni Mitchell on 13 albums and also served as engineer and producer for Neil Young, Van Morrison, Leonard Cohen, Joan Baez, The Flying Burrito Brothers, Jackie DeShannon and Leon Russell, among others.