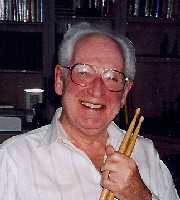 perc, US
Musician of Classical

(1917 - 2008) American percussionist. Born in Manhattan, Mr. Harris left New York in the mid-1930s, playing drums for bands on the traveling vaudeville circuit, winding up in Chicago, where he soon joined George Olsen's Music band. In 1945, after serving in the U.S. Coast Guard in Manhattan Beach, N.Y., he attended The Juilliard School, one of the world's most prestigious performing arts conservatories, where he majored in tympani and percussion. As a pit drummer on Broadway, Harris opened 30 shows in 14 years, including “On the Town,” by Leonard Bernstein, “Call Me Mister,” and the Broadway musical that propelled Carol Channing to fame, “Gentlemen Prefer Blondes.” In a career with many highlights, Mr. Harris said he was honored to be invited by Bernstein to join the The New York Philharmonic Orchestra in 1958, where he played for 24 years. At the same time, he played in and contracted with numerous orchestras for film, radio, TV-show theme music and commercials, as well as working 18 years as Joseph Papp’s music administrator on such productions as “Hair” and “A Chorus Line.” He accumulated a vast collection of ethnic musical instruments during his travels around the world, and became an authority on world music. In 1988, he donated 1,000 instruments to the music department of the Metropolitan Museum of Art in New York. On moving to Holmes Beach in 2000, Harris formed a jazz trio that recorded and released two CDs and played locally with the Anna Maria Island Community Orchestra and Chorus. His trio performed at numerous events, clubs and restaurants locally, including Ooh La La! Bistro and Da Giorgio Ristorante in Holmes Beach, the Longboat Key Community Center, the Studio at Gulf and Pine, and events for the Jazz Society of Sarasota.