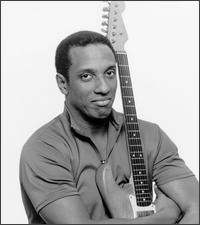 Ammerican jazz-funk/fusion guitarist and bandleader. Born 11 September 1955 in Osaka, Japan. Died 25 July 2008 in Manhattan, New York, USA. Returned to Baltimore, Maryland with his family at the age of two. He studied at the University of Miami music college, meeting guitarist Pat Metheny, and bass players Jaco Pastorius and Will Lee. His work can be heard on Steely Dan’s “Gaucho” (1980), Paul Simon’s “One Trick Pony” (1980), Sting’s “…Nothing Like the Sun” (1987, soloist on the cover version of Jimi Hendrix’s “Little Wing”) and Billy Joel’s “The Stranger” (1977). He also worked for Harry Belafonte, Marcus Miller, Carla Bley, Miles Davis, Ruben Rada (on the album “Montevideo”) and Gil Evans. He recorded three albums with The 24th. Street Band between 1979–1981. In 2007 he was diagnosed with throat cancer.

Window Shoppin' on From All Sides by Hiram Bullock

Can't Fight the Funk on Try Livin It by Hiram Bullock

Shut Up on Way Kool by Hiram Bullock

Cactus on From All Sides by Hiram Bullock

Until I Do on From All Sides by Hiram Bullock

Never Give Up on Way Kool by Hiram Bullock