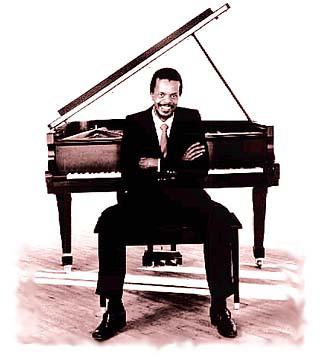 American pianist and composer. Born: 6 April 1934 in Houston, Texas, USA. Died: 27 February 1999 in Los Angeles, California, USA (aged 64). Tapscott was a distinguished pianist, with many jazz compositions to his name. He was probably best known for founding the group, the The Pan-Afrikan Peoples Arkestra ("PAPA" or "The Ark", for short) in 1961, and ran it through to the 1990s, before he chose to retire. While he is known for his piano work, initially he served in the US Air Force in Wyoming, he then returned to Los Angeles, all whilst playing mostly trombone with various bands, one of which included Lionel Hampton between 1959–1961. During the 1960 US black civil rights era, he was one of a great many artists, through his work with PAPA, centred on re-introducing the pan African-roots sounds back into the core of jazz music, along with developing African-American music as a whole, through performance and refinement of the art. PAPA later joined to be part of a larger organisation in 1963, the Underground Musicians Association (UGMA), which later changed name to the Union Of God's Musicians And Artists Ascension (UGMAA). Some of the musicians that played in The Ark during this time include: Arthur Blythe, Stanley Crouch, Butch Morris, Wilber Morris, David Murray, Jimmy Woods, et al.

To the Great House on Aiee! The Phantom by Various Artists

The Goat and Ram Jam on Aiee! The Phantom by Various Artists

Lately's Solo on Dial B For Barbra by Horace Tapscott

Nica's Dream on The Tapscott Sessions Vol. 11 by Horace Tapscott

Dem' Folks on Dial B For Barbra by Horace Tapscott