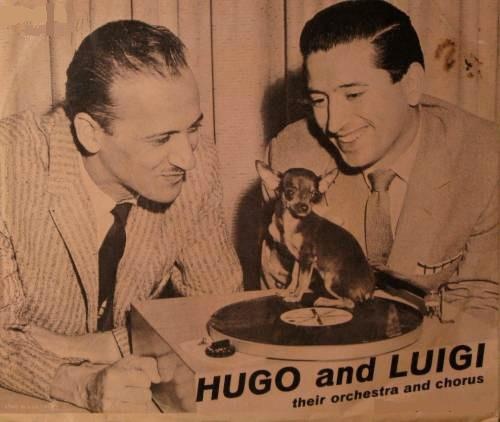 Band, US
Pop
A.k.a. Mark Markwell

Hugo & Luigi were a record producing team, made up of songwriters and producers Luigi Creatore and Hugo Peretti, who shared an office in New York's Brill Building. Besides their working relationship, the two were cousins. First coming to attention with singles released on Mercury Records in the mid-1950s, they went on to produce Perry Como, Elvis Presley, Sam Cooke and other artists for RCA Victor, including the hit records "Twistin' The Night Away", "Another Saturday Night", "The Lion Sleeps Tonight" by Tokens, The Isley Brothers' classic "Shout", and Little Peggy March's "I Will Follow Him". They co-wrote Presley's hit "Can't Help Falling in Love", with George David Weiss. Hugo & Luigi were also onetime co-owners of Roulette Records. Songs composed by the duo were often credited to "Mark Markwell", and records they produced carried their distinct logo. While at Roulette, Hugo and Luigi produced and arranged a series of "Cascading Voices" and later "Cascading Strings" easy listening recordings. After co-founding Avco Records in 1968 and producing artists such as The Stylistics in the 1970s, Hugo & Luigi bought the label and relaunched it as H & L Records, which they ran until they retired at the end of the 1970s. Peretti died in 1986. Creatore died in 2015.