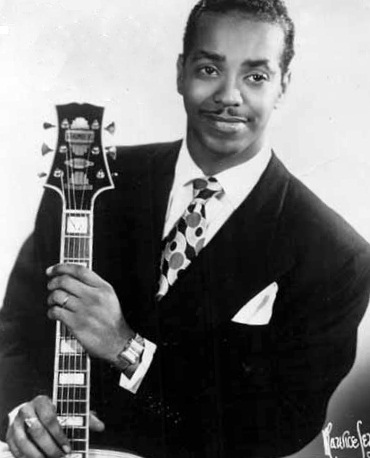 Born : December 29, 1920 in Someville, Massachusetts. Died : April 22, 1987 in Perris, California. During the rock & roll era, Irving Ashby was a prolific session guitarist in and around Los Angeles, where he worked as a freelance musician. But like so many session players on R&R records, he was basically a jazzman, who had to adapt to the Big Beat in order to pay the bills. Irving Ashby was in demand primarily for his solid rhythm playing, but he was also a very adept soloist. Ashby began playing guitar at age nine. In 1940 he joined Lionel Hampton's band and continued playing with Hampton for two years. Ashby is the guitarist on Hampton's influential "Flying Home" (1942). In 1947 he joined Nat King Cole's Trio, replacing Oscar Moore. He joined Oscar Peterson's trio in 1952 and was a prominent member of Norman Granz's Jazz at the Philharmonic at that time. He also led his own sextet, with which he recorded for United Artists Records, and was active as a teacher, publishing a guitar instruction book in the process. In the mid and late 50's Ashby was more often found in the recording studios, both as a guitarist and an upright bass player. For the Imperial label he played on many instrumental recordings, first with The Ernie Freeman Combo, later with drummer Sandy Nelson. Ashby also recorded instrumentals under his own name. By the 60's Ashby was also working outside the music field, but continued playing from time to time, sometimes brought back into the limelight by various guitarists whom he had strongly influenced, such as Howard Roberts.

Spinx on Birth of Jazz Guitar by Various Artists

Altitude on Birth of Jazz Guitar by Various Artists