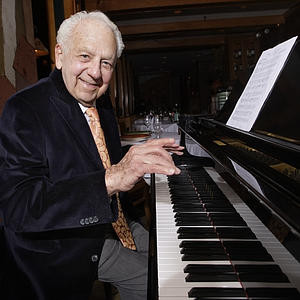 Irving Fields (born August 4, 1915) is an American pianist and lounge music artist who was born in New York City, New York. Some of his most noteworthy compositions include "Miami Beach Rhumba", "Managua, Nicaragua" and "Chantez, Chantez," covered by Dinah Shore in 1957. From November 1, 1954 to January 3, 1955, he and his orchestra appeared on the DuMont Television Network series The Ilona Massey Show, hosted by Ilona Massey.

Ich Hub Dir In Bud! (I Have You In The Bath!) [Live] on Nisht Far Di Kinder! - Jewish Comedy Songs! Live At The Fallsview Hotel, New York by Irving Fields