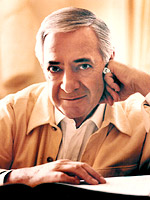 American lyricist (born in Brooklyn, USA on April 7, 1912 - died in Danbury, Conn., USA on March 18, 2009). Wrote lyrics for songs of which many became hits, including “All or Nothing at All,” with music by Arthur Altman, a No. 1 song in 1943 for Frank Sinatra, with Harry James And His Orchestra and “Hold My Hand,” written with Richard Myers for the film “Susan Slept Here,” which was nominated for an Oscar as best song in 1954.

Never Smile at a Crocodile on Peter Pan by Various Artists

Were You There on Tone Poets by Various Artists