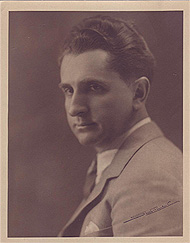 Jewish-American lyricist and screenwriter, best remembered for his collaborations with Milton Ager (July 6, 1892 - April 17, 1991). Born in Poland, Yellen emigrated with his family to the United States when he was five years old. He grew up in Buffalo, New York and began writing songs in high school. After graduating from the University of Michigan in 1913, he became a reporter, continuing to write songs on the side. Yellen's first collaborator on a song was George Cobb, with whom he wrote Dixie songs including "Alabama Jubilee," "Are You From Dixie?," and "All Aboard for Dixieland." He is best remembered for his collaboration with composer Milton Ager. They entered the music publishing business as part-owners of the Ager-Yellen-Bernstein Music Company. Yellen also worked with many other composers such as Sammy Fain, Lew Pollack, Ray Henderson, and Harold Arlen. Yellen wrote the lyrics to more than 200 popular songs of the early 20th century. Two of his most recognized songs, still popular in the 21st century, are "Happy Days Are Here Again" and "Ain't She Sweet." Yellen was on the board of ASCAP from 1951 to 1969. He was inducted into the Songwriters Hall of Fame in 1972 and the Buffalo Music Hall of Fame in 1996. He died in Concord, New York, aged 98.

My yiddish momme on Shir from the Heart: Jewish Folk Music by Shir