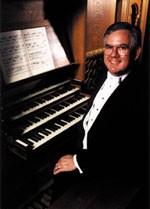 hps, *1952 US
Musician of Classical
A.k.a. James David Christie

James David Christie is an American organist with an extensive performance career throughout the world and especially in Europe. He is Chair and Professor of Organ at the Oberlin Conservatory of Music, College Organist at Wellesley College and the Distinguished Artist in Residence at the College of the Holy Cross. He has made several recordings and is a highly sought-after performer and teacher. He has been the organist of the Boston Symphony Orchestra since 1978. Former employers: Boston Conservatory of Music, Massachusetts Institute of Technology, Harvard University, and Boston University. He has recorded extensively and won several prestigious prizes; he has given over 50 tours of Europe, Japan, Australia, Iceland and Russia, and has served on over 40 international competition juries. H