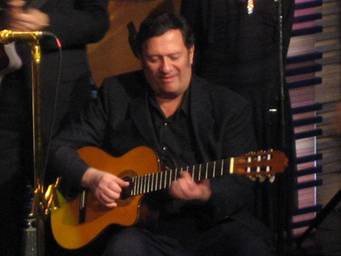 Jay Berliner (born May 24, 1940 in Brooklyn, New York) is an American guitarist and multi-instrumentalist. Starting with his first television experience at age 7 on NBC’s The Children's Hour with sister Eve, his career has spanned the globe: from the Metropolitan Opera house (the “old” Metropolitan Opera House in midtown Manhattan), where he was house guitarist and mandolinist; to Kenya’s 1963 Independence Day celebration as accompanist for Harry Belafonte and Miriam Makeba; touring Japan as a banjo soloist; performances at The White House; and more recently, playing onstage at the Metropolitan Opera (in the “new” house at Lincoln Center) with Barbara Cook, Audra McDonald, Josh Groban, and Elaine Strich, recorded live on DRG Records, Inc.

The Magic Of Love on Encore by Russell Watson

Stickball on Bananas Are Not Created Equal by Jay Berliner

Use Me on Bananas Are Not Created Equal by Jay Berliner

Stormy on Bananas Are Not Created Equal by Jay Berliner