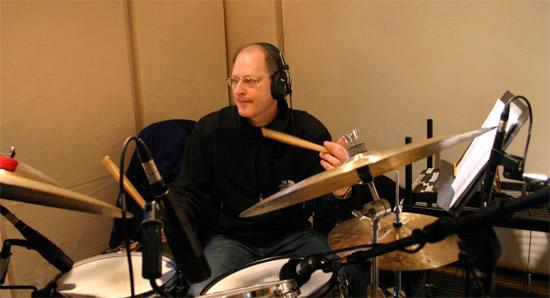 Jeffrey Lee Hirshfield (b. New York City, August 22, 1955) is an American jazz drummer.Hirshfield studied under Ed Soph. He worked for the Joffrey Ballet in 1976-77 and then played with Mose Allison (1977–79). During the 1980s he worked with Red Rodney and Ira Sullivan (1981–85), Toshiko Akiyoshi (1986-89), and Bennie Wallace (1987–90). Alongside Fred Hersch and Steve LaSpina, he was a member of the trio Etc. during 1988-91. During this time he also played in a trio with Hersch and Michael Formanek. From 1990 he played with Harold Danko, played in Formanek's Wide Open Spaces project, and played again with LaSpina in a quartet setting. He also worked in a quartet with John Abercrombie and Andy LaVerne early in the 1990s. In the mid-1990s he played in a trio with Marc Copland and Dieter Ilg

The Call on Kimbrough by Various Artists

One More Kiss (From Follies) on Color and Light: Jazz Sketches on Sondheim by Various Artists

What Can You Lose? (From Dick Tracy) on Color and Light: Jazz Sketches on Sondheim by Various Artists

Hope on Kimbrough by Various Artists

Phantom Of The Bopera on Etc Plus One by Steve La Spina, Fred Hersch & Jeff Hirshfield

Days Gone By on Etc Plus One by Steve La Spina, Fred Hersch & Jeff Hirshfield

Splurge on Etc Plus One by Steve La Spina, Fred Hersch & Jeff Hirshfield

Waltz for Lee on Kimbrough by Various Artists