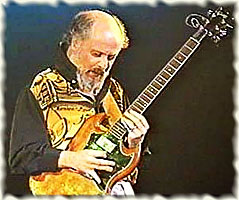 Jeremy Cedric Spencer (born 4 July 1948) is a British musician, best known as one of the guitarists in the original line-up of Fleetwood Mac. A member since Fleetwood Mac's inception in July 1967, he remained with the band until his abrupt departure in February 1971, when he joined a religious group called the "Children of God", now known as "The Family International", of which he is still a follower. After a pair of solo albums in the 1970s, he continued to tour as a musician, but did not release another album until 2006. Releasing further solo albums in 2012 and 2014, Spencer has also recorded as part of the folk trio Steetley.

It Hurts Me Too on Precious Little by Jeremy Spencer

Mona Speaks her Mind on Homebrewed Blues by Jeremy Spencer

A Minor Gavotte on Yearning Winds by Jeremy Spencer

A Glimmer of Hope on Homebrewed Blues by Jeremy Spencer

Mystery of Mandola on Yearning Winds by Jeremy Spencer

My Sweet Baby on Yearning Winds by Jeremy Spencer