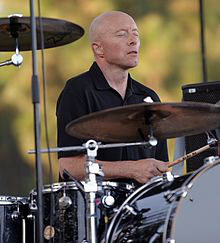 Jerome Stanley "Jerry" Augustyniak (born September 2, 1958) is the drummer for the American band 10,000 Maniacs. Augustyniak joined the band in March 1983, two years after the group formed. Augustyniak continues to perform with the band who tour extensively. Their most recent album, "Music From The Motion Picture", released in 2013, has garnered rave reviews.