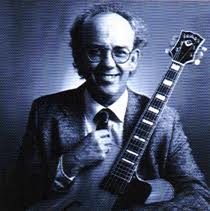 Born in Nebraska on September 21, 1940. Guitarist Jerry Hahn is known as one of jazz’s high-ranking guitarists. He became a key name in the 1960s for his input to the up-and-coming fusion movement, and has remained one of its dedicated promoters until today. At the age of 7 he began playing the guitar and was playing professionally with the Bobby Wiley Rhythmaires at the age of 11. He joined the John Handy Quintet in 1964 and was recording two albums for Columbia Records with them. His next stations were The Jerry Hahn Quintet (1967, one record for Arhoolie Records) and the Gary Burton Quartet with Roy Haynes and Steve Swallow (1968, three albums). Then the Jerry Hahn Brotherhood was initiated by him in 1970. This formtion has been described as one of the “trailblazers of rock-jazz integration”. Later he joined the Bennie Wallace Quartet and he also performed, toured, and recorded with former 'Cream' drummer Ginger Baker. Hahn has a Doctor of Music degree and taught at several universities. He continues to perform, record, tour, and conduct guitar clinics. Hahn was a columnist for the Guitar Player magazine and wrote a textbook for jazz guitar.

Chuck and Chick on Cool Man Cool by Various Artists

Too Cool for School on Cool Man Cool by Various Artists

Minnie Lights Out on Cool Man Cool by Various Artists

One for Jerry on Cool Man Cool by Various Artists

Dig Some Sides? on Cool Man Cool by Various Artists