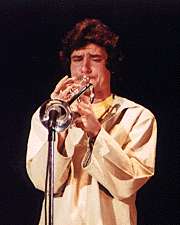 Jerry Hey is an American trumpeter, flugelhornist, horn arranger, string arranger, orchestrator and session musician who has played on hundreds of commercial recordings, including Thriller and the distinctive flugelhorn solo on Dan Fogelberg's hit "Longer".He is known as the Seawind trumpeter and arranger who plays with Gary Grant, Larry Williams and Bill Reichenbach Jr..He composed and arranged the song "Jedi Rocks" for the 1997 Special Edition re-release of Return of the Jedi.He co-produced four songs on Lisa Stansfield's 2014 album, Seven.