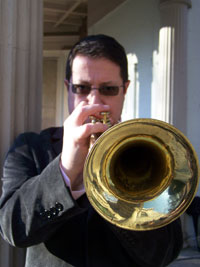 James Robert Rotondi (b. 28 August 1962) is an American jazz trumpeter, educator and conductor.Born in Butte, Montana, and the youngest of five siblings, Rotondi lives in Graz, Austria, and performs there and internationally with several groups, as well as being a professor at the University for Music and Dramatic Arts (Graz). Prior to this Jim established himself on the New York City jazz scene for more than 20 years. By summer 2010, he had released 13 CDs as a leader (on Criss Cross, Sharp Nine, and most recently, Posi-Tone), as well as playing on over 80 CDs as a sideman.

Bc on Dark Blue by Jim Rotondi

In Graz on Dark Blue by Jim Rotondi

Our Day Will Come on Dark Blue by Jim Rotondi

Manteca on Four of a Kind by Jim Rotondi