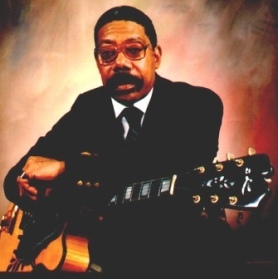 Jimmy Ponder (born May 10, 1946 - died September 16, 2013 in Pittsburgh, Pennsylvania) was an American jazz guitarist.Ponder started playing guitar at age 14, and was heavily influenced by Wes Montgomery and Kenny Burrell. He began playing with Charles Earland at 17, and in the following years played with Lou Donaldson, Houston Person, Donald Byrd, Stanley Turrentine, and Jimmy McGriff. He moved to Philadelphia and later New York City in the 1970s, and recorded extensively as a leader for a number of jazz labels. Since the late 1980s, Jimmy frequently returned to his hometown to perform with his popular trio alongside two of Pittsburgh's other Jazz greats; Roger Humphries and Gene Ludwig. Ponder's most commercially successful releases were his 1978 Muse Records set All Things Beautiful (U.

Blues Bag on All Things Beautiful by Jimmy Ponder

Snow Blower on B. Baker Chocolate Co. by Various Artists

Love Me Right on All Things Beautiful by Jimmy Ponder

You Are Too Beautiful on Steel City Blues by Jimmy Ponder

Seven Minds on All Things Beautiful by Jimmy Ponder

Spirit Level on B. Baker Chocolate Co. by Various Artists