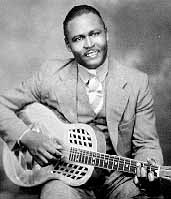 Born: May 11, 1905 in Jackson (or) Raymond, Mississippi. Died: January 28, 1950 in Chicago, Illinois. Blues guitarist and singer Joe McCoy was the older brother of Charlie McCoy, and was married to another notable blues artist, Memphis Minnie (Lizzie Douglas). He was active in Memphis, Tennessee in the 1920s and then moved to Chicago, where he played with his brother Charlie in The Harlem Hamfats. In the 1940s he formed a band called Big Joe & His Rhythm.

Please Baby on One in a Hundred by Joe McCoy

You Know You Done Me Wrong on Times Ain't Like They Used To Be: Early American Rural Music, Vol. 2 by Various Artists

Purpose on Golden Hour by Atlas