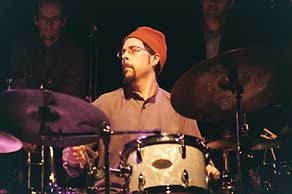 John Hollenbeck is a jazz drummer and composer from Binghamton, NY, USA. He also has interests in classical music, and other musical forms. He is linked to free jazz and avant garde forms of jazz.He is best known for The Claudia Quintet and his work with trombonist Bob Brookmeyer. After receiving degrees in percussion (B.M.) and jazz composition (M.M.) from the Eastman School of Music, Mr. Hollenbeck moved to New York City in the early 1990s. He has worked with many of the world's leading musicians in jazz (Bob Brookmeyer, Fred Hersch, Tony Malaby, the Village Vanguard Orchestra, Kenny Wheeler), world music (Pablo Ziegler), and new music (Meredith Monk). In the fall of 2005, John Hollenbeck accepted a professorship in Jazz Drums and Improvisation at the Jazz Institute Berlin (Germany) wher

Running Up That Hill on My Choice by Theo Bleckmann

Take My Life on Elegy by Various Artists

Masks on Mercy by Meredith Monk

Braid 1 And Leaping Song on Mercy by Meredith Monk