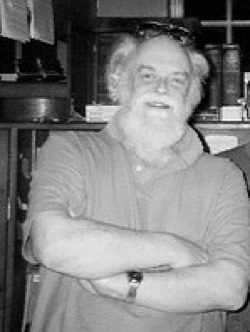 Born 20 March 1927, Wivelsfield, Sussex, England Died 25 May 2004, Burnham, Buckinghamshire, England. John R.T. Davies, as he was best known, was a remastering engineer of early jazz recordings par excellence. Nicknamed 'Ristic' among his close circle of friends, Davies was also a member of The Temperance Seven, a 1960s jazz-revival band, in which he played trombone, trumpet and saxophone. He often wore a fez during performances, hence his alias in the band -- Sheik Haroun of Wadi el Yadounir. His work on sound restoration, especially of old 'shellac 78s', and his vast collection of early Jazz, R&B and Blues recordings gathered over the years is now represented in The Borthwick Archive at York University, UK. Davies recorded sessions with the Steve Lane Band in 1952. He also recorded limited jazz & blues releases for Doug Dobell on the '77' label. The label was so named after Dobells Record Shop at 77 Charing Cross Road in London, which was a focus point for music aficionados and the only source for these recordings. Purchase tax was the motivator for these limitations - the rules stating that tax was due on the entire production if it exceeded 100 copies - but this small quantity was generally enough to satisfy the demand. Producer Brian Harvey chose R. T. Davies to record "Blues From The Roundhouse" on the '77' label in February 1957, with Alexis Korner, Cyril Davies, Terry Plant & Mike Collins. Also recorded was "Streamline Train", which Korner had previously recorded with Ken Colyer in 1955, but this recording by R. T. Davies did not appear until 1984 on the 'Krazy Kat' compilation "Alexis 1957". Under the guidance of his widow Sue, and in accordance with his wishes, R. T. Davies' collection is now safely housed at York for those wishing to learn more of this important era in the early fusion of jazz and blues.